Athene | A Good Night’s Sleep At Any Age 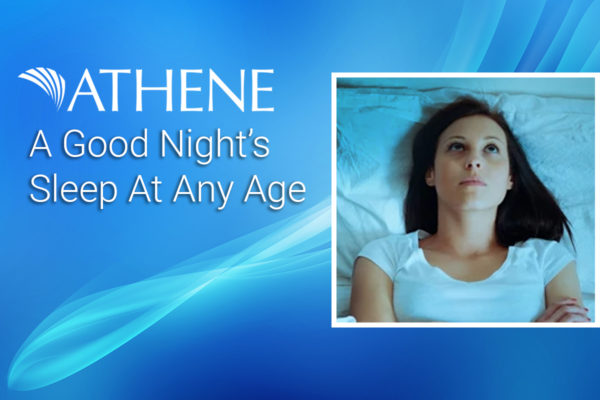 Sleep is an important piece of the health puzzle that eludes many Americans. One in three adults don’t get the sleep they need, according to the Centers for Disease Control and Prevention. And catching the necessary shut-eye does not get any easier as you age.

Throughout your lifetime, your sleep is constantly changing. One study, in fact, found that the bulk of changes in adult sleep patterns occur between the ages of 19 and 60. These changes include decreased deep and REM sleep, increased waking after going to sleep, and being easily aroused from sleep.

As you transition into older adulthood, your circadian rhythm may shift forward so that you’re not only falling asleep earlier but also getting up earlier. It’s not that your need for sleep declines, but rather, the ability to get sleep can prove challenging. “Particularly after retirement, there’s less structure in life and greater opportunity to nap during the day,” says Terry Cralle, M.S., R.N., certified clinical sleep educator in Washington, D.C., and co-author of Sleeping Your Way to the Top. You may be getting a similar amount of sleep as when you were younger, but your sleep is simply more fragmented.

No matter where you are in life, though, it’s essential to get the recommended amount of sleep for your age. The National Sleep Foundation recommends that adults ages 18 to 64 get seven to nine hours of sleep a night while those 65 and older are advised to log seven to eight hours. And for people who claim they can live on six hours or less a night, studies bear otherwise, showing that this amount of sleep can set you up for health issues like diabetes, heart disease, and obesity, as well as decreased cognitive function.

So how do you move toward better sleep? Make a few simple tweaks to your routine: